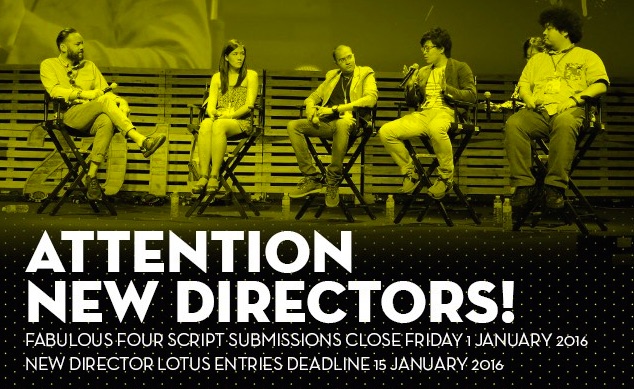 4 “fabulous directors” presenting their films at the 2015 Adfest Edition.

If you are an emerging director or assistant director, don’t forget the deadline for script submissions to ADFEST’s Fabulous Four program closes in less than one month on Friday 1st January 2016.

ADFEST is once again looking to unearth the region’s top emerging directors as part of its ‘Fabulous Four’ program, which supports new and emerging directors by screening their films to a live audience of influential production executives, creative directors and agency producers.

Directors and assistant directors based in Asia and the Pacific (including Australia, New Zealand and the Middle East) can now submit five-minute film scripts inspired by the theme of next year’s ADFEST: ‘Creative Intelligence’.

“Fabulous Four has the power to transform a director’s career by developing their reel and giving them the chance to share their filmmaking process with the industry’s most influential creative professionals,” says Jimmy Lam, President of ADFEST.

When all short film scripts have been submitted by 1st January 2016, ADFEST’s Film Craft and New Director jury panel will then vote on their favourite scripts. The top-scoring directors will become ADFEST’s ‘Fabulous Four’ for 2016.

The directors will have less than six weeks to bring their short film scripts to life in time to premiere at ADFEST 2016, which runs from 16th – 19th March at the Royal Cliff Hotels Group in Pattaya, Thailand.

Sihabutr Xoomsai, award-winning director at Triton Film and next year’s Jury President for Film Craft Lotus and New Director Lotus, says: “Fabulous Four is an incredible program for emerging directors – it’s an opportunity that could put you on the map as a serious director. My big break was directing an almost-no-budget music video for my friend’s band. The second one was from Leo Burnett Thailand. It wasn’t even a TVC. It was just a video for a client to show at their event, but we did our best and did a great job. If you have a chance, make it a great one.”

For more information on eligibility and script submission, visit: http://www.adfest.com/Entries_fabulous.php

Note: to be eligible, the film must be one of the first seven works directed by each director.