We were immediately impressed by the recent Mini Clubman spot. Unconventional and non-formulaic, the film doesn’t make use of the dramatic stunt driving, beautiful landscapes, celebrity spokesperson nor trendy fast visuals so ubiquitous in Chinese car commercials. The simple film focuses only on the car, with the narrative following its journey and transformation.

While it is no surprise that the mastermind behind the spot was a somewhat unconventional director, we had not expected to learn it marked his directorial debut.

Peng Yang Jun has many strings to his bow – freelance photographer, media expert, curator, and founder of the slick iliangcang lifestyle and design magazine and online shop, which he founded with his wife, Chen Jiao Jiao, in 2013. The site has since built a community connecting with hundreds of lifestyle publications and organizations across the globe.

In his new role as film director, Peng is already earning critical acclaim. SHP+ caught up with Peng to learn more about his background and his first commercial film experience. 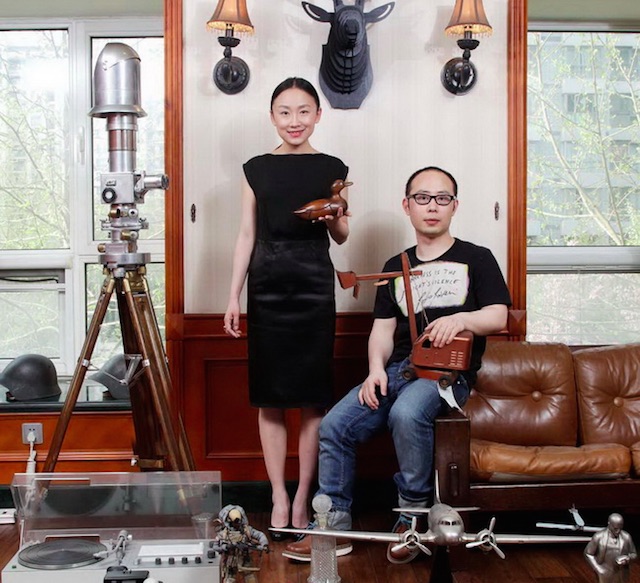 SHP+: This is your first commercial film. How do you feel about it?

Peng Yang Jun: I feel pretty good. Although the film looks very simple, executing it was actually difficult. By the time we completed shooting, I had begun to enjoy it and wanted to shoot more.

SHP+: How did you get this first job as a director? Did you pitch an idea first before getting it? What was Mini Clubman’s brief?

PYJ: Mini Clubman China has always tried new things and made unique TV commercials. Their project manager and I have been friends for a decade. He’s an interesting character; you would think he is an artist instead of someone that sells cars. We have collaborated before, mostly on print and web design. They had seen the documentaries and brand commercial we’d made previously, so they asked if I would want to direct the commercial for their new product. I thought it would be fun.

They gave me a brief outlining the size of the car and the interior changes and we pitched an idea based on that.   We got along well, agreed on the direction and everything just clicked. Their team was very courageous, encouraging me to be more edgy. Like cutting the car for example – there were only two new cars at that time, but they still encouraged me to dismember one. They were supportive of my creative direction the entire time. There were so many unpredictable obstacles during the shooting process. They would text me and tell me that it would be okay to compromise on things, that they knew I would do my best. I was really touched, but responded, “if you think I’ll compromise, you don’t know me.” 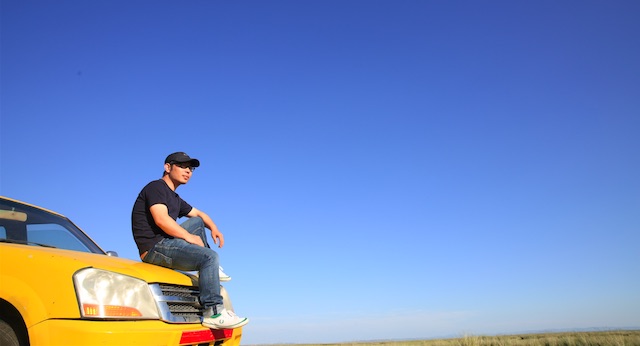 Director Peng Yang Jun on a shoot in Inner Mongolia

SHP+: In most car ads, we see cool stunt driving skills, exaggeration, or, most commonly, a celebrity spokesperson. None of those elements are present in this Mini Clubman commercial. What was your vision for the spot?

I am an automobile enthusiast myself, especially the classic cars from the sixties and seventies. I even have two of them in my collection. I like to appreciate cars through the changes they have gone through over time, so for this spot I chose to compare and contrast the three generations of Mini Clubman. The new generation is larger in size, has more doors, and an upgraded interior. I chose to tell the story from God’s perspective, and to make the frames extremely symmetrical. By doing so, I hope to present Mini Clubman from a totally different perspective. It’s the easiest way for people to understand. One thing that is for sure – we have created an automobile commercial that is different from any other in China. I also want to give the copywriter a big shout out.

SHP+: There is a lot of aerial filming involved, and the shots are extremely symmetrical. How did you achieve that? What was the process?

PYJ: Normally, aerial shooting involves lots of frames; it seems to be a difficult thing to do. But this kind of same speed tracking is equally difficult. It’s like putting a track in the sky. From start to finish, everything has to be accurate and precise.

In the scene with three cars driving on the highway in Inner Mongolia, we used a Yatuo 800E drone to do the aerial filming because it was windy and we had a long way to go. This helicopter lookalike is mostly used for chasing scenes – it’s fast, has a good engine, can travel a long way and is good with windy conditions. When shooting the big cement scene, we had to accurately track and hover. We chose Dajiang s900 six-axis drone for this. It was perfect for controlling in a small space. There were countless shots and with the wind, our workload was doubled. In the end we needed two postproduction companies. It took a long time just to stabilize the camera. Our post-production team called this ‘Fascist aesthetics’. Very few people could understand it. Thankfully, the final product is great and everybody’s happy.

Film crew of Mini Clubman on the shoot in Inner Mongolia

SHP+: Photography is about documenting something as it is, leaving the audience to do the thinking. Advertising is about instilling an artistic style and adding effects in post production. Do you think your photography background conflicts with making commercial work?

PYJ: My photography work focuses on documentary photography and culture which seems quite different from commercial work. However, when I first started out I did fashion photography for a long time and from that I learned the rules of commercial expression. Besides, my main thing is media. I have worked in the magazine publishing industry for ten years. I was the chief photographer at Vision, then the chief creative director of the Italian magazine Colors and now the chief creative director at The Outlook Magazine. I have always been a media guy which has taught me to think multi-dimensionally. I believe that the sense of form serves the content, and the content creates the visual. I am very aware of the differences between making my own creative work and commercial work. I think that rather than conflicting, my past experiences interact and complement one another.

SHP+: How do you balance your photography work and commercial work? Will making more commercial films be your focus in the future?

PYJ: I am a very diverse person. I used to be anxious and confused about my identity, but now I’ve got it figured out. I am a freelance photographer, a media person, a curator, and founder of iliangcang. If I can manage to balance all of these, then balancing photography and commercial films is nothing. I will not take work I do not like but I want to have an open mind to do things. Everything is interconnected and inspires one another. Just like Steve Jobs once said, “creativity is just connecting things.”

We aim to operate our business comprehensively. iliangcang is a website, an app, a publishing house, a shop, a magazine, two shows, and a rich resource for artists. This leaves us a lot of room for imagination. Our online shop comprehensively defines the aesthetics of living and features the best design products sourced from all over the world. Our community has thousands of users, including Yohji Yamamoto, Han Han and others sharing things and products they like.In the future, we want to make more films, but not just directed by me. We hope to recruit and sign directors, good post-production teams and operating teams from inside and outside China.

Making of the Mini Clubman